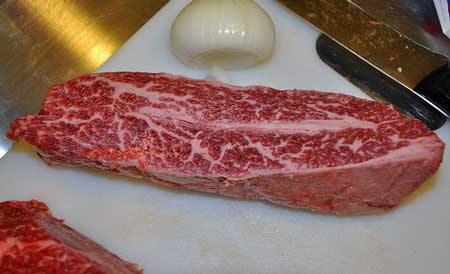 We have been taught to think that beef tenderness is caused by marbling (the visible fat streaks in beef).

It is true that fat gives meat its tenderness and flavor. Without fat, beef becomes dry, tough, and flavorless. But it is not the visible fat layers that are responsible for beef tenderness. Tenderness and flavor are created by the microscopic fat cells deep within the meat fibers, which are invisible to the naked eye.

The white fat streaks in beef are simply a convenient gauge of whether those all-important microscopic fat cells within the meat fibers are present in sufficient amounts.

But beef marbling is not always a good gauge of tenderness in grass fed beef cattle. And some cattle breeds simply will not produce marbled meat, no matter what they are fed, how fat they get, or how tender their beef is.

Fat is deposited in a beef animal in three ways: 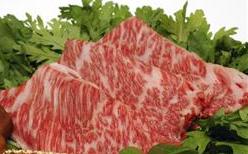 The white fat streaks are an indicator of tenderness in some, but not all beef. Beef tenderness is actually caused by microscopic fat cells within the meat fibers that are invisible to the naked eye.

Of these three types of fat deposits, only one actually is responsible for beef tenderness and flavor - the microscopic fat cells.

The marbling and external fat layers are simply 'extra' fat. Unlike the microscopic fat cells within the muscle fibers, these two additional fat types are not universal to all breeds, and their abundance will vary greatly depending on the feed source (i.e. grass vs. grain (or doughnuts...) and on the type of cattle breed being raised. Some cattle breeds won't marble and don't produce large amounts of back fat no matter what kind of feed they eat.

The visible fat streaks of marbled beef have become the standard for gauging beef tenderness in North America because, until recently, virtually all beef in North America was finished in a feedlot, on a grain-rich diet. 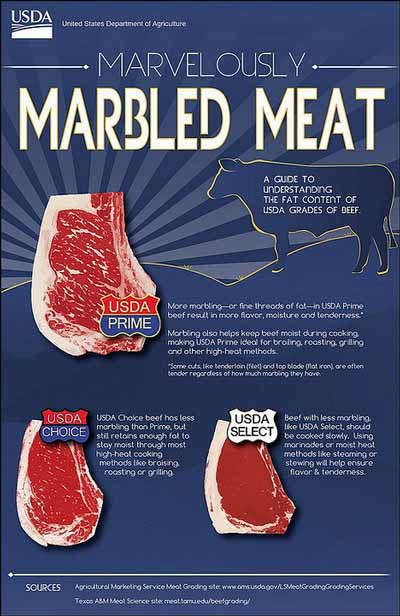 The combination of a fairly lethargic lifestyle in the feedlot pens and eating large amounts of grain tends to produce lots of excess fat in grain-fed beef, which is deposited as visible streaks of fat within the beef. This marbling forms at the same time as the microscopic fat cells are filled with fat during the finishing stage of cattle's lives. But in reality, it was always the invisible microscopic fat cells hidden within the muscle fibers - and not the visible fat streaks - that gave beef its tenderness.

Since nearly all cattle in North America have been finished on grain and in feedlots throughout the past century, marbling simply became a handy quick visual gauge to judge the amount of microscopic fat cells present within the actual muscle fibers of the meat. It saves time at the slaughterhouse because it does not require laboratory analysis of the meat to gauge tenderness.

However, even in a strictly grain-fed beef production system, many beef breeds are unfairly docked by the current USDA beef grading system because they do not produce these easily visible fat streaks, despite being just as tender as any other breed. For example, Piedmontese cattle do not marble even on the richest grain-fed diet - yet they are consistently one of the most tender beef breeds.

Using visible fat streaks as a gauge of tenderness and 'degree of finish' also does not work in many other regions of the world where grass-finishing on pasture is more common (like New Zealand or Argentina, for example).

As grass finishing becomes more popular again in North America and Europe, the focus on visible fat streaks in grass-fed beef will eventually fade and be replaced by a focus on the cattle's feed source and lifestyle, and (hopefully) by a new grading system that properly analyses whether the microscopic fat cells within the muscle tissues have been filled.

If you are buying grass-fed beef, ignore the current USDA beef grading system and don't worry so much about whether the meat looks marbled. In time the grading system in North America will likely adjust to account for grass fed beef.

But in the meantime, learn about how your grass fed beef was produced and learn to gauge beef tenderness and flavor yourself based on your palate and by being an informed grass fed beef consumer...

to read tips on how to be an informed grass fed beef consumer.