The farm maps below along with their accompanying explanations show how the winter grazing rotation is laid out (and how it differs from the summer pasture rotation shown in Part I).

The maps below also explain how this example farm will provide cattle with drinking water throughout the winter grazing rotation, even while the summer water system is turned off.

And finally, you will see how the winter grazing plan used by this example farm has certain areas set aside for grazing during extreme cold weather, which provide natural shelter and optimal nutrition to help the cattle to stay healthy even during the most challenging weather that winter has up its sleeves. 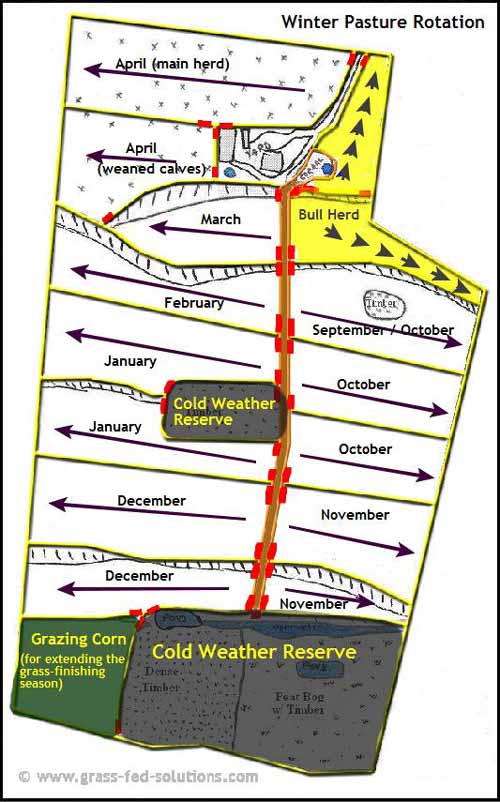 The winter pasture rotation on this example grass fed beef farm lasts from October through April. You can learn how to prepare your pastures for winter grazing by following the link.

The switch from the summer grazing strategy to the winter grazing strategy occurs in the corridor marked October on the map. This corridor is close to the frost-proof livestock water site in the corral so cattle can easily walk back and forth daily for water. The November pasture corridor is much further from water, but by mid-November this farm expects to receive snow and late November or early December the cattle will likely voluntarily switch to eating snow for all their drinking water needs as the long walk to water becomes too tedious for them.

The November and December corridors are subject to heavy snow drifting during winter, which is why they are grazed early in the winter pasture rotation.

The January and February corridors contain a lot of high ground that typically losses large portions of its snow to wind erosion so winter grazing can continue easily even during heavy snow drifting. Also, both corridors contain heavy bands of timber along the perimeter, which serve as shelter and natural wind breaks during cold weather. The January corridor is also located alongside the smaller 'Cold Weather Reserve' marked on the map where the cattle are allowed to seek refuge in the deep timber during periods of extreme cold weather.

March is a period of lots of freeze-thaw cycles. The March corridor is most prone to wind erosion, which will contain large patches of exposed grass, even if the snow pack crusts over completely during a particularly bad freeze-thaw cycle. The March corridor is also close to the frost-proof livestock water sites for when the cattle start needing water to take over from eating snow for their drinking water needs. 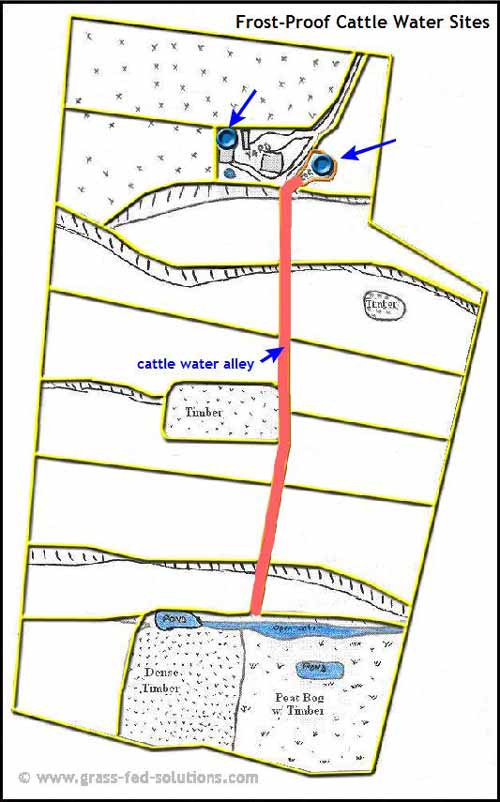 The map on the left shows the two frost-proof livestock water sites in the farm plan. The cattle waterer in the corral serves the cattle in early winter (during breeding season), and then serves the bull herd for the remainder of the winter.

The second frost-proof livestock water site is split so two groups of cattle can drink simultaneously from the same water site, which is important for the weaning strategy discussed in Part III of this article.

The orange cattle water alley provides access back to the frost-proof livestock water site in the corral until the cattle switch to eating snow for their drinking water needs. 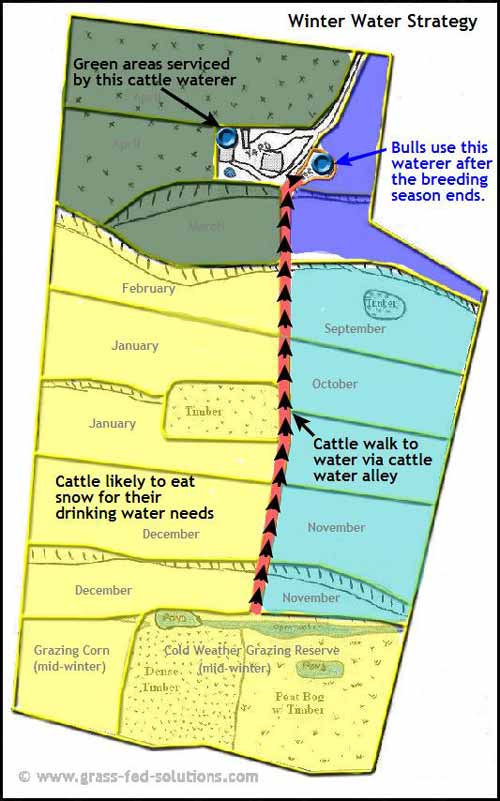 The color-coded map on the left shows how different parts of the winter pasture rotation will access water over the course of the winter.

The two blue regions, marked as October and November, are grazed at the beginning of the winter pasture rotation while the cattle still need to walk back to the livestock water corral for water via the cattle alley shown in orange. This time period coincides with the breeding season. Shortly after the breeding season ends this farm typically receives a thick blanket of snow that lasts the remainder of the winter, which allows the cattle to voluntarily switch to eating snow for their drinking water needs to avoid the long walk back to water. Thus, following the end of the breeding season, the bull herd can utilize the frost-proof cattle waterer in the corral for their drinking water needs for the remainder of the winter.

The yellow areas are all grazed during mid-winter when there is reliable snow. By the time the pasture rotation reaches these yellow areas on the map, the cattle will already have voluntarily switched to eating snow for all their drinking water needs. However, access to the cattle alley is left open until at least 2 to 3 weeks go by without any fresh tracks leading back to water. Follow the link to learn how to safely rely on snow for your cattle's primary source of drinking water during the winter pasture rotation.

The green area on this map shows where the cattle will be grazed during the spring thaw as the winter pasture rotation nears its end. This green area on the map is serviced by the second frost-proof livestock waterer once the snow begins to melt. This waterer is accessible from both sides of the weaning fence discussed later in this article. 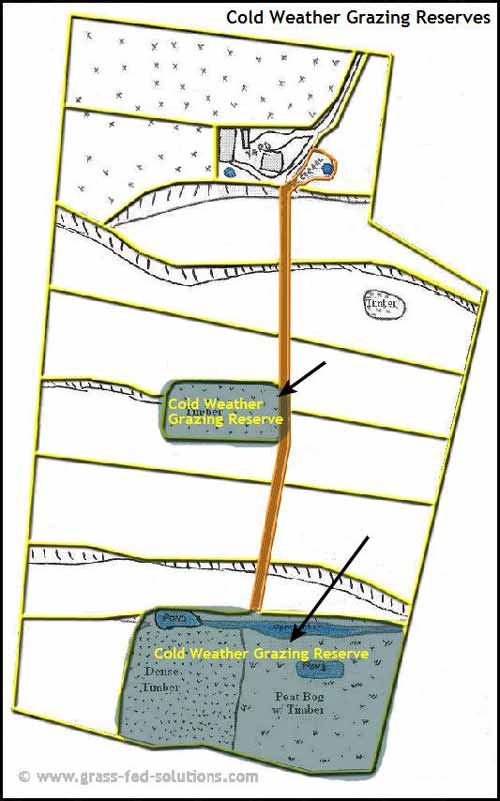 The two shaded areas on the map on the left show areas that are set aside for grazing only during periods of extreme cold weather. The timber in these areas provides the cattle with natural shelter out of the wind and prime bedding areas under the trees where the cattle can bunch together during extreme cold temperatures.

The larger shaded area at the bottom of the map is a large bog area. While it produces a thick crop of grass every year, it usually cannot be grazed during the summer for safety reasons unless there is an extreme drought that makes the soils stable enough to allow the cattle to venture into this area. During the winter, it cannot be grazed until the ground is firmly frozen. If this area is not required for winter grazing during mid-winter, it should be grazed starting no later than February 1st to ensure that all the grass in this area is used up before the spring thaw begins. The swamp grass is relatively low in nutrients, so it requires extra nutrient supplementation beyond what is normally used during the rest of the winter pasture rotation. The extra supplements required for grazing inside this bog area have been calculated in advance by the farm's livestock nutritionist. 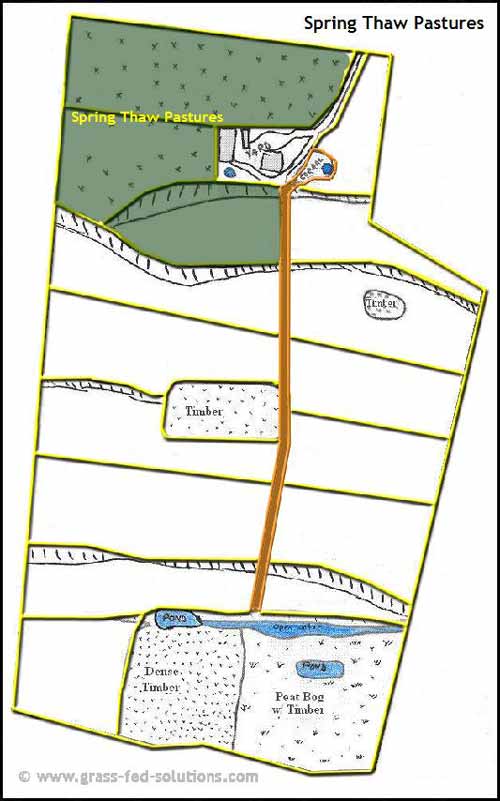 The shaded green area on the map on the left shows the pastures that are specifically set aside for grazing during the late winter and early spring when the frost is coming out of the ground. While other pastures on the farm turn to mud at this time of the year and are therefore extremely vulnerable to cattle trampling, the soils in these 'Spring Thaw Pastures' are sandy, firm, well-drained, and on high ground so they are extremely resistant to damage even during the spring thaw. During an especially wet spring, these pasture areas are also directly adjacent to the emergency hay storage area so grazing can be suspended and replaced by hay-feeding for the worst of the spring thaw period.

The 'Spring Thaw Pastures' are directly adjacent to the frost-proof livestock waterer that needs to take over as the cattle's primary drinking water source as the snow begins to melt. The proximity to water as well as the high ground and well-drained soils in the Spring Thaw Pastures also ensure that there are few puddles that would tempt the cattle to drink unclean water.

Since the cow/calf herd in this farm plan starts calving around June 9th, the 'Spring Thaw Pastures' also are where the previous year's calves will be weaned in April after the worst of the spring thaw ends using electric fence weaning, discussed later in this article.

The Spring Thaw Pastures are large enough to continue grazing until May when the growing season resumes, when cows and weaned calves can be reunited in the same herd, and when all the cattle can return to their summer pasture rotation.

for the grass-finishing, calving, weaning, and breeding strategies, as well as the sick animal treatment protocol, bull herd management, and drought / emergency protocols.