Rotational Grazing -
Creating a herd migration in your pastures. 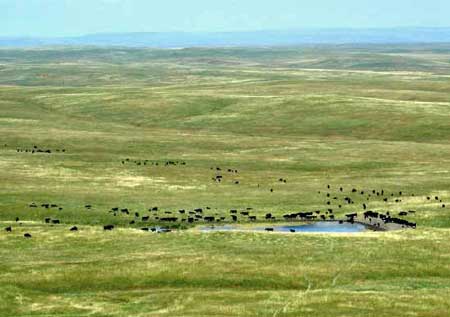 I want to change how you think about cattle fencing.

The fences in your rotational grazing program do so much more than just ration out the grass in your pastures and contain animals to stop them from running away. With the right fence layout and the right grazing strategy, your fences allow you to shape the grazing behavior of your cattle and control the impact that your cattle have on your land.

This has huge implications for your pasture yields, livestock health, and cattle weight gains.

So I want to challenge your perception that a fence is merely a containment system. Your electric fences are the combined steering wheel, brake, and accelerator that you use to control your most powerful farm tool - your grazing herd!

This article will give you a peek at some of the tremendous power that you can unleash when you harness your cattle herd as a management tool. I'll show you the grazing management strategy that allows you to turn your pasture rotation into a true herd migration. And I'll explain the electric fence layout at the heart of this grazing strategy - the "smart electric fence grid."

Harnessing the power of the herd migration:

The success of all wild grazing herds, from the wildebeest migrating across Africa's Serengeti to the wild American bison that once numbered in the many tens of millions in the Great Plains of North America, all have two things in common. These two traits are the secret behind their amazing success as grazing species.

These two simple reasons allowed their populations to soar to such seemingly impossible large herd numbers. And the impact that these herds had on the land beneath their feet is directly responsible for the incredibly rich soils that are found in these areas today.

Rotational grazing is modeled after the migrations of wild grazing species.

A case in point - migrating bison and the fertile soils of the Great Plains.

The fertile soils of the Great Plains region produce an incredibly rich harvest, year after year, that feeds not only the entire continental United States and Canada, but produce such vast agricultural surpluses that it the largest agricultural exporting region in the world.

While modern farming technologies, fertilizers, human ingenuity, and a free market all play a vital role in producing such vast harvests and motivating all the hard work that goes into producing these enormous crops, they did not create the rich soils underpinning these bountiful crops.

That credit goes to the great herd migrations of American bison who grazed these plains for the last 10,000 years, from the end of the last Ice Age until they were nearly hunted to extinction in the 19th century.

This an important point because it means that when you use the correct grazing strategies to manage your pasture rotation, your cattle herd has the same power to improve your pastures, increase productivity, and add nutrients to your soils just by imitating the behavior of the bison herds that came before them.

And electric fences are the key to recreating the power of those great herd migrations in your farm pastures.

A combination of permanent and portable electric fences provides the greatest flexibility while being the cheapest fencing solution on the planet. This combination is also the key to creating DAILY pasture moves.

Electric fences allow you to bunch your cattle together, forcing them to graze as a group. The bite of the electric fence wire replaces the ravenous appetite of the lion or wolf to keep the herd from scattering into the four directions of the winds.

But electric fences do so much more than just keep cattle contained. They also allow you to artificially manipulate the grazing behavior of your cattle.

Used correctly, electric fences force cattle to graze as a cohesive herd. Daily pasture moves re-create a herd migration, thereby unleashing the power that comes from bunching grazing animals together in a migration. And unlike a wild grazing herd migration that makes up its own mind where to graze and how quickly to move to the next patch of fresh grass, with a smart electric fence grid you control the herd migration.

That control means you can change the speed of the migration and thereby change the intensity of the herd's impact on the land to achieve a wide variety of management goals. Electric fences turn your cattle herd into the most powerful tool at your disposal.

And it's a tool that will work for you for free. As long as you keep providing access to fresh grass, your migrating cattle herd will continue to improve your soils, stamp out weeds, and boost pasture yields without charging you a dime.

You can learn more about the grazing principles that allow you to harness the power of your pasture rotation in my article series about the seven core rules of successful grazing management.

Not all fences are equal.

The vast majority of fences lock you into permanent pasture sizes. The more pasture divisions you try to create, the more expensive it gets, and the more congested your land becomes with a maze of wires and gates. Re-creating a effective herd migration in this congested mix is nearly impossible

But there is one fencing system that breaks this mold. This system adds nearly infinite flexibility to your farm, costs a fraction of any other fencing system, and keeps your land almost entirely free of wires even while making it possible to create so many individual grazing slices in your pasture rotation that it becomes almost effortless to move your herd daily.

I call this the Smart Electric Fence Grid as a way to distinguish it from other electric fences. It isn't just an electric fence. It is an entire grazing management strategy that relies on a very particular configuration of electric fences. And it allows you to truly mimic the power of the wild grazing rotations with your own cattle herd, no matter how big or how small your herd is.

The Smart Electric Fence grid relies on a combination of permanent and portable electric fencing. Here's a simplified diagram of how it works:

Despite how solid this sounds, these "beams" are generally built using just a single wire on all interior fences. After all, electric fences aren't meant to be physical barriers - they are merely psychological barriers that use cow psychology to their advantage.

These broad corridors are then temporarily subdivided by portable electric cross-fences. These are like the 'rungs' or 'steps' of a ladder. And you only ever need three short cross-fences to manage your entire herd migration!

Once your cattle move to the next pasture slice, you take down the old back fence and reset it as the front fence for the subsequent rotational grazing slice. Pasture moves simply require you to roll up a single stretch of portable wire to move it over to its next position. It's a daily routine that can take as little at 10-15 minutes per day to move the herd, move the back fence, and set up fresh water access. (This process, including water access, is covered in detail in my Smart Electric Fence Grid article series.)

Essentially, this means that you can create a grazing slice of any size, anywhere you want in the ladder, simply by moving the steps up and down the corridors.

No two slices ever have to be the same size or be set in the same location. No two complete loops around the whole pasture rotation ever needs to use the same pasture subdivisions. And you can speed up or slow down your herd migration at a moment's notice.

You can even easily avoid grazing certain areas by simply skipping past them during the pasture rotation or hammer the daylights out of an individual pasture slice where you want to apply greater trampling impact, such as a tall weed patch that is shading out the grass underneath.

And yet despite this tremendous flexibility, it takes far less capital investment to build a smart electric fence grid than to build any other fence infrastructure, including all other electric fence systems.

From theory to hands-on construction...

Understanding the wide range of functions that this highly versatile tool is able to perform is the first step in developing your grazing management strategy. It is the key to turning your cattle herd into a powerful farm management tool.

Thumbnail Image Credit: US Department of Agriculture, Flickr, CC BY 2.0