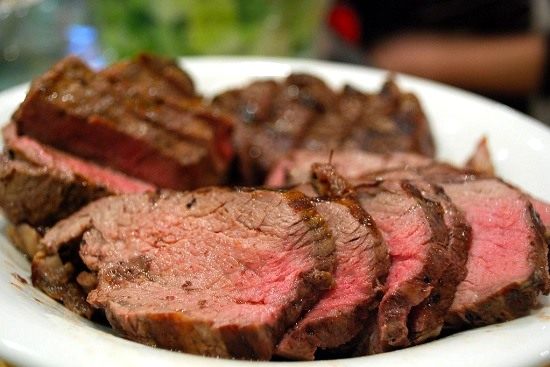 The first two questions that I am often asked by people who hear about my family's experiences raising grass fed beef and about my book Grass Fed Cattle is:

The short answer is that, yes, there is a significant difference in flavor between grass fed and grain fed beef. The reason, as I'll discuss in detail below, comes down to the superior flavor of the beef fat in grass finished animals.

And which is better - grass fed or grain fed? While this ultimately is a matter of personal preference, I definitely prefer beef that's been grass finished. But rather than take my word for it since I'm obviously biased, take the grass fed taste-test challenge for yourself and weigh in with what your taste buds prefer!

But the key difference in flavor is not caused by the meat, but rather by the beef fat hidden deep within the beef fibers.

As most chefs will tell you, the primary source of flavor in all meat comes from the fat. It doesn't take much fat to add flavor, but without any fat, there is NO flavor.

As an example of how cattle diet affects the micro-nutrients contained within beef fat, let's look at a single simple example: beta carotene. It's the perfect example because, unlike the majority of micro-nutrients within beef which cannot be seen with the naked eye, you can actually SEE how beta-carotene affects beef fat!

That color comes from beta-carotene (an important anti-oxidant and the precursor to vitamin-A), which is essentially absent in barley, found in small amounts in corn, and is present in much higher concentrations in a grass pasture diet. It's the same plant pigment that makes carrots orange. Green grass may not look orange, but it's loaded with beta-carotene.

Beta-carotene is simply one of many micro-nutrients that are more abundant in beef raised on a grass diet (you've also probably already heard that grass fed beef is much higher in omega-3 fatty acids). When the effect of all these micro-nutrients are added together, it is not surprising that beef raised on a pasture-diet is going to taste different than beef fattened on a grain-based feed ration.

This difference in fat flavor also explains why grass-fed beef smells more rich and aromatic when it is grilled, boiled or pan-fried. So it's the flavor of the fat that leads me to prefer the taste of grass fed beef.

But don't take my word for it, try it for yourself!

Which flavor do you prefer: grass fed or grain fed?

1. Buy 2 steaks - the same exact cut, one grass-fed and one grain-fed. Make sure you know which is which when you cook them.

2. Stick them on the barbecue with just a little salt and pepper and nothing else (in this test you want to keep it simple so you can recognize the flavors of the beef, not obscure them under a marinade or sauce).

3. Sear on both sides, then turn the heat to the lowest setting and slow-cook them both to medium rare.

The grass-fed steak will cook slightly faster so be careful not to overcook it. You can learn more about grass-fed cooking instructions by following the link.

4. When they are both ready, cut a few pieces of each.  Can your taste buds tell the difference?

Test your family and friends - give them a blind taste test; a piece of each without telling them which is which until after they've weighed in with their opinion!

And then make sure you come back here and use the comments box below to weigh in on which flavor you preferred!