Are you brave enough to graze pure alfalfa? 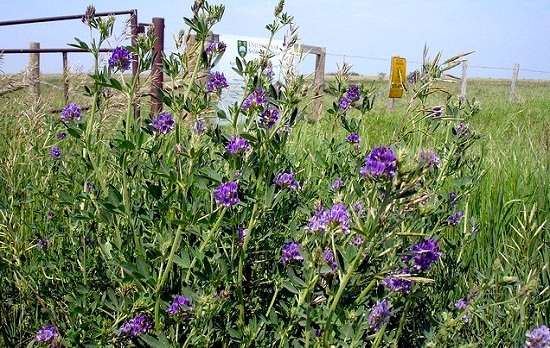 A lush field of pure 100% alfalfa (or clover) can crank out huge volumes of extremely high-quality grazing. Which means they have the potential to be fantastic for grazing and grass finishing cattle.

But grazing this crop comes with a price... bloat risk.

This bloat risk is why few farmers dare to graze pastures that contain more than 50% clover or alfalfa in the pasture mix.

In this article I am going to explain what causes bloat when cattle graze these bloat-prone plants and how to manage that risk so you can successfully include pure stands of these crops in your grazing program or grass finishing strategy.

Cattle naturally produce gas in their first two stomach chambers (rumen and reticulum) during digestion, which they normally relieve by burping.

But when cattle graze alfalfa, that gas has the potential to become "frothy" or "bubbly," which prevents the gas from releasing naturally through burping. This type of bloat is known as "frothy bloat."

Here's what is going on inside the cow's stomach...

The proteins in alfalfa are soluble. Soluble proteins are prone to foaming, much like mixing soap into water and then stirring it vigorously. However, that's only part of the story.

The rumen microbes responsible for digesting forages in a cow's stomach LOVE alfalfa because it is so easy to digest. This essentially causes a rapid microbial bloom inside the rumen, which produces a huge quantity of both gas and slime as a by-product of the microbial bloom.

The frothy nature of all these slimy bubbles means that cattle cannot burp out the gas. The slimy bubbles can't escape. And so pressure builds up inside the stomach until either the lungs, heart, or both no longer have room to function, causing the animal to either suffocate or die of heart failure.

Do not take this risk lightly...

Grazing alfalfa safely means meticulously pre-planning how to transition your cattle onto this feed source.

And once grazing begins, it requires very attentive monitoring and being prepared for a rapid intervention strategy at the first sign of trouble.

Although there are a number of "bloat-free" or "no-bloat" alfalfa varieties that have been developed, in reality these varieties simply reduce but do not completely eliminate bloat-risk . They still have to be grazed with caution and with extreme attentiveness to the bloat-management rules discussed in this article.

If you are looking for an alternative legume crop that is truly non-bloating, consider legumes like cicer milkvetch, birdsfoot trefoil, or sainfoin. From the cow's point of view, these legumes have all the benefits without the risk. And many have the added bonus of retaining nutrients extremely well for late-fall and winter grazing.

But they also have their drawbacks. Their crop yields tend lower than yields achievable with alfalfa. Newly-seeded crops can be very hard to establish - establishing them may take years. And the thick stalks and creeping nature of these plants means that while cattle can graze them easily, they are not ideal for haying.

The article about cicer milkvetch from the Canadian Cattlemen's magazine, called Tough to Establish But Tough To Kill Once It Grabs Hold, provides a great overview of how to use it in your cattle farming strategy.

The most common strategy for using alfalfa in a grass finishing program is to graze the last cut of an alfalfa field in the late autumn after it has been frost-killed.

The first few days after a frost the alfalfa is particularly wet (and dangerous) because the frost breaks the plant cells open as the water inside the cells freezes and expands. However, once the cell walls are broken open, the insides of the plant cells begin to dry out, which makes the plant safer to graze.

So, wait a few days after the killing frost, then you're ready to begin grazing.

This sounds simple, but before you turn your cattle loose make sure you read the rest of the grazing rules discussed in this article - there is still a lot that can go wrong even if you wait for the field to dry down!

Saving the last cut of your alfalfa field for late autumn grazing is a great strategy for extending your grass finishing season (it's my favorite late-fall grass finishing strategy) so you can maintain really high weight gains in your cattle herd long after the growing season ends.

Grazing alfalfa during the growing season

Pure alfalfa or clover can also be grazed during the growing season. They are fantastic grass finishing pasture at any time of year!

But grazing them during the growing season means that bloat is an even higher risk.

If you decide to graze them during the growing season, it is best if the entire grazing rotation is limited strictly to alfalfa pastures so that the cattle are not switching back and forth between alfalfa and non-alfalfa pastures.

Many people that graze these bloat-prone crops during the growing season will also simultaneously use a bloat-inhibitor product, such as 'Bloat Guard' (available as feed supplement, a drinking water additive, or incorporated into a mineral block), which is available through most cattle feed stores or from your local veterinarian.

Here are the essential rules to bear in mind when grazing alfalfa and other bloat-susceptible crops. These rules are vital to your success, regardless of whether you are grazing these crops during the growing season or in late autumn after a killing frost.

Bloat disaster on my parent's farm

40 years ago when my parents first bought their farm, they lost 25% of their entire cattle herd to bloat, all in one day. It nearly cost them the farm!

But it didn't happen on alfalfa. It had an even simpler cause. The cattle simply switched from a very dry pasture to a very lush pasture. And the pasture move occurred early in the morning when the grass was wet after a hard frost.

They even monitored the cattle for a couple of hours after the pasture move. There was no sign of trouble, so they relaxed and went to do other chores.

An hour later the train passed by the farm. The railroad engineer noticed the cattle and was concerned. He called to ask if it was normal for so many cows to be laying down in the middle of the day with their feet in the air and their bellies as round as balloons.

That call saved the lives of the rest of the herd because my parents were able to intervene using a combination of the bloat intervention techniques discussed in this article.

Amazingly, the cows were only unattended for a little over an hour!

When it comes to bloat, the devil is definitely in the details.

Bloat Intervention - what to do when things go wrong! 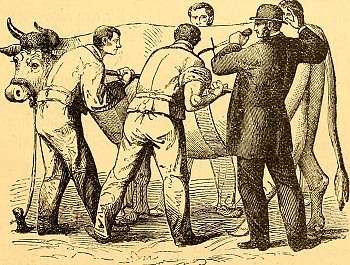 As you can see from the length of the grazing rules and warnings, grazing pure alfalfa requires considerable preparation, planning, and attentiveness.

What are your strategies for grazing alfalfa? Do you have any tips for managing cattle bloat?

Do you have good (or bad) experiences with grazing alfalfa?

Do you have a favorite strategy for grazing it?

Do you have some tips for preventing and managing bloat?

Share them in the Comments section below! And please use the social media sharing buttons to help me reach more readers.